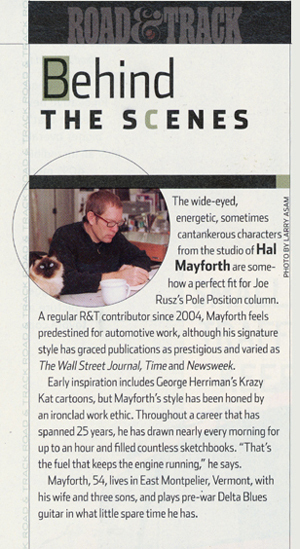 I've been working with art director Bert Swift for years, ever since he was working at Snow Country Magazine. A great guy. When He moved to Road and Track and started using me, it had a nice symmetry because my Dad went into the automobile business the day I was born and is a long time Road and Track subscriber.

This month I am included in the Behind the Scenes section of the magazine, and while it mentions that I was predestined for automotive work, It doesn't tell the whole story. The fact is that my kids have some pretty deep gearhead genes on both sides of the family. Both their Grandfathers had very successful racing careers.

Additionally, my family was pleased that our cat, Frieda was finally getting some national exposure. 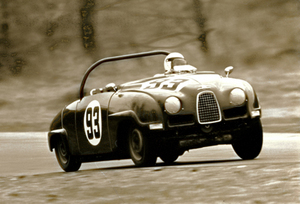 Here's my Dad, Hal Mayforth Jr. at Lime Rock, CT in April of 1961. He built this SAAB Spyder out of an SAAB 93 that had rolled. He cut the roof off and modifed the engine with specs that he obtained from Sweden. On the back of this photo he writes,"It was the only car in it's class, so it was entered in a race with about 24 MGA's. #93 was the over all winner of that race." Not bad considering the displacement on this car was 850 cc's, alot less than an MGA. I have fond memories of numerous victory laps. 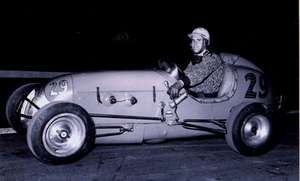 This is my father-in-law Francis Magurn in 1949. He started racing migets in 1940 in a Ford-powered car that he built from scratch. By 1946 he was racing other people's Offenhausers professionally. In fact he still owns the track record in Seekonk, RI as they flattened the corners out several years later. He's 91 now and still sharp as a tack. We're lucky. Alot of his racing buddies didn't survive. Check out that roll bar!